The BMW i8 is one of the newest in an increasing movement to make cars more or less electric. The car industry is trying to take steps to increase their efforts to reduce their carbon footprint on the world. The new BMW does just that. It is a sleek car in its body design. It combines a gas powered motor and an electric motor as well. The car has an interior that is on par with the other BMW cars that their customers have come to know. 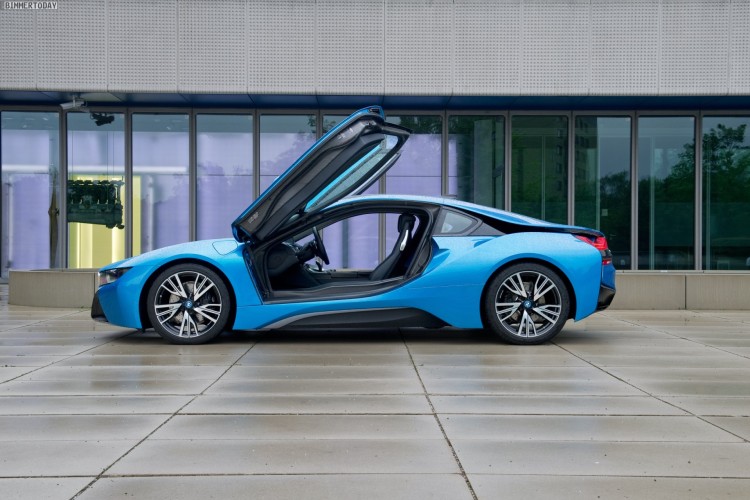 The engine of this sporty electric car is actually a combination of an engine and a large battery pack. The battery pack powers the front wheel axis powertrain, which also can power the whole car in Electric Mode. The back axle powertrain is powered by the fuel motor. The fuel engine is a three cylinder engine that is turbocharged for maximum horse power while still being efficient. Overall, the engines have a range of about 330 miles before needing to be refueled and recharged. The fuel tank that supplies the engine holds just under 12 gallons of fuel.

The exterior of the BMW i8 is the sportiest you can find in an electric car. Designed for maximum efficiency and air flow, the car rides low to the ground and truly gives off the sports car vibe to onlookers. Oddly enough, the car sports tall wheels, the standard being a 20 inch wheel. What this does in the design is it allows the car to reduce aerodynamic drag, giving the car more fuel efficiency as it moves along the road.

The inside of the car is very unique, even among other cars manufactured by BMW. The sight lines in the car are incredibly modern, giving the car an almost space-age feel. These lines are mixed with reclaimed veneer wood parts and recycled fiber content, tying in the theme of being environmentally friendly. The seats sit low to the ground, yet are comfortable for most people that are riding in the car. There is a floating instrument pod in the place of the normal dash that gives the driver a new look at the controls.
BMW i8 InnovationsThe innovations in this car come from many of the aforementioned items. The dual power of the electric battery pack engine and the turbocharged engine give the car various options for operation. The design of the car is made to optimize efficiency for the car, as are the 20 inch wheels. And, while giving off the image of being in a sports car, you can operate at 28 mpg in a gasoline hybrid state, making the car efficient on the owners gas budget.
Overall, this car seems to be packed full of new technologies and new idea, but fails to meet the value test of money to experience. At a cost of $140,000, one would expect to get the sports car value of cars that motor heads love. It seems to be a hefty price tag for a car that looks sleek while only achieving 28 mpg and 15 minutes of pure electric mileage. One of those numbers needs to be more of a wow factor to expect anyone outside the market of sports car fanatics to seriously consider purchasing this car.