The initial electric concept of the Mercedes-Benz B-Class Electric was initiated back in 2011 and previewed for the first time back in the year 2012 at the Paris Motor Show. Though this was just a preview, local production was initiated two years later in April 2014 at the Mercedes-Benz Rastatt factory in Germany. Since then, this car has attracted much attention due to the fact that it’s the only electric car to come equipped with an Attention Assist program. This program pinpoints a drowsy driver hence giving you the opportunity to avoid him/her. 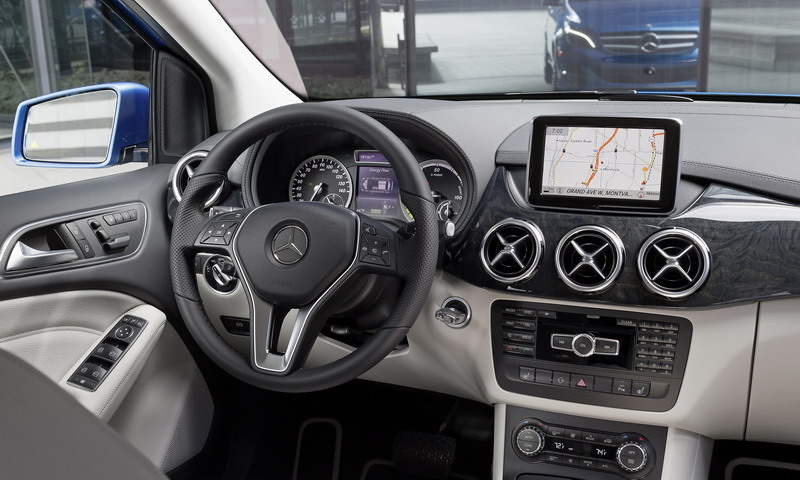 Mercedes-Benz has been known to produce quality cars, and the B-Class is no exception. This car comes with circular air vents powered by two (2) 12 volts DC power outlets. An air filtration system provides maximum interior air ventilation. When it comes to security, the interior section of this car comes equipped with a perimeter wall alarm, a tracker system, a trip computer, a delayed accessory power and a door auto-lock feature.
The Mercedes-Benz B-Class electric car can comfortably accommodate five (5) passengers. The seats can be inclined and adjusted to suit your preferences. If you are the type of person who can’t stay without an active internet connection, this B-Class Mercedes-Benz has got you covered thanks to the presence of a mobile internet hotspot.
Other notable interior accessories include a front and rear cup-holder, a manual telescoping steering column, front cigar lighters, an illuminated glove box and a day-night auto-dimming rear view mirror.

The sleek yet sporty body of this car is anything you can expect from a company such as Mercedes-Benz. This electric car comes with a chrome grille, fully galvanized steel panels, chrome side windows, and a black front windshield trim. It comes equipped with a fully automated Aero-Composite Halogen Headlamps. The good thing about these headlamps is the fact that the automated system can automatically dim them OFF or ON depending on the weather condition. The rear fog lamps will be your ideal partner during the cold and foggy seasons. The Mercedes-Benz B-Class will come equipped with five (5) all season tires which will be running on a 17” 10-Spoke Aluminum wheels.

A 132-kilowatt electric motor will power the Mercedes-Benz B-Class. This motor will get its power from a 36-kilowatt lithium-ion battery. The electric motor will be capable of producing a horsepower of 177 and a torque of 251 pound-feet. The good thing about the lithium-ion battery is the fact that it only takes you a maximum of 3.5 hours to fully charge it using a 240V charging station. Once fully charged, the battery can cover up to 87 miles. Thanks to the mbrace mobile app, you can track the charge level of your battery as well as pinpoint the closest charging station. The power transmission of this electric car will be supplied by a single automatic transmission system. This transmission system will only power the front wheels simply meaning that this car will operate on the FWD drivetrain. The transmission system will be capable of powering this car to speeds of up to 99.5 miles per hour. An acceleration speed of 0 to 60 mph in less than 7.9 seconds will push this car to its maximum speed.